A few weeks ago I wrote an article on reflux and breastfeeding, and the need to look for a cause for reflux in your breastfed baby.  This is a companion article to that one, looking at the role of stomach acid in our bodies.  It seems that reflux is so frequently diagnosed (and often misdiagnosed) and acid suppressing drugs are now so prevalent that acid itself is being seen as an issue by some mums. I wanted to write a little about what stomach acid is, what is does and the relationship between breastfeeding, acid and our gut health.  If you haven't already read the previous blog, please do so as it looks at the NICE guidance regarding acid suppression treatment and root causes of reflux.

I wanted to start with a brief overview of what happens in the stomach and the role of acid.

Our stomach fluid is comprised primarily of hydrochloric acid, produced by cells in the stomach lining. If you remember your chemistry from school, neutral pH is  7, acid is lower than 7 and alkaline is higher. Our gastric fluid is very acidic, with a pH of 1.5-3.5.

Smelling, tasting and chewing food stimulates our stomach to secrete this acid in preparation for digestion. Obviously babies don't get a chance to chew food and wait for acid to be secreted, but perhaps this is another design reason why a baby sucks for a short time before milk lets down?  Perhaps it facilitates this process?

Acid is vital for protein digestion. Once food reaches the stomach, the acid environment causes the proteins in the food to unfold. The acid then activates an enzyme called Pepsin which breaks down the protein bonds (literally breaks the protein apart). If stomach acid is suppressed the proteins can't be broken down and digested. Any vitamins or minerals which are attached to proteins (e.g. B12) can't be extracted and therefore can't be absorbed. 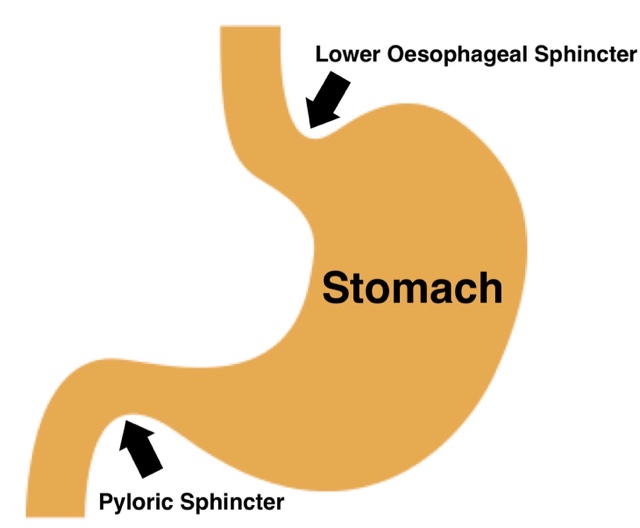 Humans are a complex ecological environment, containing around 10 times as many bacterial cells as we have human cells, and having a balance of healthy bacteria is key to our health.

Eating/drinking is a route for infection causing bacteria to enter the body, but a robust acidic stomach environment kills off a lot of pathogenic bacteria and prevents it from getting into our intestines.  It's a first line of defence.  If acid is suppressed however, the stomach has limited capacity to kill any problem bacteria.  This fact that chyme sits in the stomach for longer means that not only is the bacteria not destroyed, it has a chance to grow in the stomach and ferment the chyme.  This fermentation process creates gas and pressure in the stomach, which needs to be released.  The pyloric sphincter (bottom of the stomach) is a one way valve, and it isn't going to open until the chyme is at the right pH, so the 2 way upper sphincter valve (the lower eosophageal sphincter or LES) opens and reflux occurs!

In addition to this gas effect, the suppression of stomach acid can actually allow pathogenic bacteria to grow around the upper sphincter muscle.  This growth partially paralyses the sphincter, and without correct function - reflux occurs.  Yes you read that correctly - acid suppression causes reflux.  The listed common side effects of Omeprazole, for example ( a commonly prescribed drug for infant reflux) are: 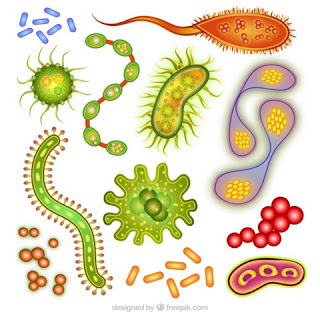 The surface of the digestive system is covered by a vast number of bacteria. I recently heard the digestive system being described as an area outside of the body, which is an interesting way to think of it. Essentially we have a tube from our mouth to our anus which carries food and other substances from one end to the other. Our "body" is on the other side of this tube wall, and therefore the tube or gut could be thought of as an outside area where we absorb nutrition into the body. It's an interesting approach which helps us to picture bacteria covering the gut wall on the "outside" surface in the same way that our skin is covered in bacteria on that outside surface.

Our gut wall is crammed (hopefully) with beneficial bacteria, and these bacteria help to synthesise immune system cells called lymphocytes which protect the body from invaders. They also play a role in other immune responses in fighting viral infections. It is estimated that 80-85% of the immune system is located in the gut wall. If the gut bacteria biome is damaged the whole immune system is affected.

Acid suppression means that pathogenic bacteria, which would normally be killed in the acid stomach, survive and pass into the intestines where they upset the bacterial balance. This affects the immune system. Studies have shown significantly increased risks of gastro-intestinal infection and of respiratory infection, including pneumonia in infants treated with acid suppressing drugs.

Another link between digestion and immune function is in allergies. There is a well established link between asthma and reflux. 1 in 13 people in the UK now have asthma, and as early as the 1930s a study found that 80% of children with asthma had low stomach acid (Bray, GW 1931). A recent study ( Untersmayr & Jensen-Jerolim, 2008) looking at protein digestion and allergies found the following:

The data reviewed here suggest that the immunologic or clinical outcome after the consumption of a digestion-sensitive dietary protein depends to a certain degree on the gastric digestive capacity. If the food protein is exposed to gastric enzymes during transit, protein cleavage takes place, inducing either oral tolerance or immune ignorance toward the ingested food protein. However, if proteins persist during the gastric transit because of impaired digestion, such as during acid-suppression treatment, IgE-mediated food allergy can be induced. Gastric digestion might also influence the extent of reactivity in already sensitized patients. Physiologic gastric proteolysis substantially decreases the allergenic capacity of ingested food proteins, whereas severe allergic reactions at much lower amounts of ingested food proteins could occur if digestion is impaired”

In other words, an acidic stomach environment promotes protein digestion and substantially decreases the potential of an allergic reaction. Or putting it another way (since an acid environment is the normal physiology ), acid suppression inhibits protein digestion and substantially increases the potential of allergic reaction. Look at how many children are diagnosed with both reflux and cows milk protein allergy/intolerance. Which came first? Is the CMPI causing the reflux, or is the reflux medication causing the CMPI?

A 2012 article from the Journal of the Amercian Medical Association discussing PPI drugs and asthma in children stated,

Given their potential adverse effects, these medications should thus be used with great restraint for treatment of GER/ GERD during childhood. The substantial increase in use of PPIs in children during the last decade is worrisome and unwarranted. (Martinez, 2012)

Part of the way that Breastmilk has an effect on the development of the immune system is through its effect on the type of bacteria which colonise a baby's gut.  If I can just quote a couple of studies which highlight this:
In The impact of Breastmilk on infant and child health, Oddy (2002) states:

The commensal (normal, healthy) microbial flora of the gastrointestinal tract as well as respiratory microbial agents, stimulate the functional maturation of the immune system (Holt, Sly &Björkson 1997)....
The microbiology of Breastmilk has a large impact on bowel development and gut microflora

Breast-feeding is associated with protection from the following infections or infection-related conditions: gastroenteritis, upper and lower respiratory tract infection, acute otitis media, urinary tract infection, neonatal septicaemia and necrotizing enterocolitis. Some of the protective effects may derive from an altered mucosal colonization pattern in the breast-fed infant.

There is a direct link between the pH of a baby's GI tract and how they are fed. Although the intestine is much closer to neutral than the stomach, breastfed babies have a more acidic digestive environment than a formula fed baby due to the gut bacteria that colonises the gut. In the first 6 weeks of life breastfed babies have a lower gut pH of approx 5.1-5.4 compared to a formula fed baby's lower gut pH of 5.9-7.3. The 3rd most abundant component in Breast milk is HMOs (human milk oligosaccarides). Oligosaccarides are specific carbohydrates which canot be digested by the baby. They are purely there to feed bacteria - specific helpful bacteria! They encourage the growth or lactobacillus and bifida bacteria. Lactobacillus species produce lactic acid, and what does lactic acid do? It lowers the pH of the intestinal environment, making digestion easier and also creating a healthy environment for those bacterial strains to continue growing. Acid suppression makes it harder for these bacteria to colonise the gut by changing the balance of bacteria and allowing pathogenic bacteria strains to reach and establish in the gut.

Acid is not the enemy. We are designed to have an acidic environment in our stomach, and human and our healthy, helpful commensal bacteria evolved around an acid digestive environment.

That brings me full circle back to the previous blog on looking at the root causes of reflux. Mothers and babies deserve someone to look in a holistic way at reflux rather than prescribing drugs with far reaching effects without full discussion. If you are struggling with reflux in your breastfed baby and would prefer to look at how altering breastfeeding might help, have a look at my previous blog and contact a board certified lactation consultant or a qualified breastfeeding counsellor to look at root causes.

We should think carefully before undoing some of protective effects that breastfeeding promotes in our babies.

Oddy, 2002 The impact of Breastmilk on infant and child health. http://www.researchgate.net/publication/10894560

Wold & Adlerberth, 2002 Breast Feeding and the Intestinal Microflora of the Infant — Implications for Protection Against Infectious Diseases http://link.springer.com/chapter/10.1007/0-306-46830-1_7