Jamie Oliver and the backlash

I don't normally feel inclined to blog on the latest controversy around breastfeeding support in the media, but I'm sure none of you have missed the comments by Jamie Oliver on wanting to support breastfeeding, and the huge backlash that he received, causing him to clarify that he didn't intend to start a breastfeeding campaign. As always these kinds of things devolve into the same old arguments of criticism and blame and name calling - generally at those supporting breastfeeding. I think that important points get missed in all of this. Important points about what is going on in society.

Before I get into that, let's look at what Jamie actually said.  He said,

We have the worst breastfeeding in the world. If you breastfeed for more than six months, women are 50% less likely to get breast cancer. When do you ever hear that? Never. It's easy, it's more convenient, it's more nutritious, it's better, it's free.

I'm not at all surprised that many women were outraged by him saying, "it's easy." Breastfeeding is not easy in the early stages. Not at all. It is a skill that needs to be learned in the early weeks, and learning a new skill can be hard. Particularly here where society doesn't understand it, doesn't understand normal breastfeeding behaviour, support is lacking, and most women are inadequately prepared during pregnancy for what is to come. It's not easy. It becomes easy if you get past the early weeks (as this fantastic graph from Nancy Mohrbacher IBCLC demonstrates) but in the UK and Ireland it is the minority of women who do get past this stage. The infant feeding survey from 2010 shows that in the UK only 23% of women are still exclusively breastfeeding at 6 weeks (which the graph shows is when it starts to get easier than bottle feeding).

In NI the figure of exclusive breastfeeding at 6 weeks is 13%. 13%! Consider that the survey shows that 64% of women started breastfeeding in NI, so a drop to 13% within 6 weeks is actually a fallout of almost 80% of the women who started. Those women did not find it easy. They wanted to breastfeed and whatever happened in their personal circumstances they felt they couldn't continue. Jamie was perhaps a little naive to use that word. In his family life they got past that stage. He has seen how breastfeeding works when it is easy. It's unlikely he sees many of those other 80% when they are asking for help. Good support is what turns things around, but at the minute, not enough women have that support.

There are other deeper issues that run through society that have underlying tugs on the breastfeeding debate though. Take a look at a few of these headlines which ran in response to Jamie's interview: 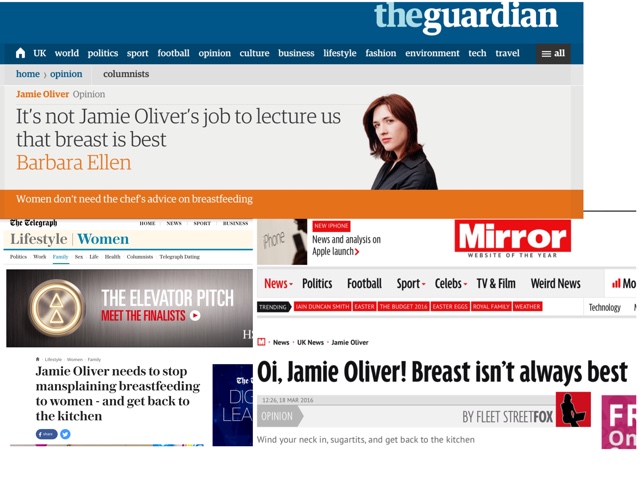 What do you see in these headlines? I see a conflict of thoughts around feminism: the lecturing of men to women, the double entendre about getting back to the kitchen, the strap line on the Mirror article calling him "sugartits". The Mirror article goes on to talk about the fact that Jamie and his wife are expecting their 5th child, again in a tone which suggests that she is being kept barefoot and pregnant, and has no choice in the whole affair.

I don't think this aspect of the debate is tackled enough. Women still don't have equality in pay. Our bodies (particularly breasts) are sexualised and used for marketing of everything from cars to beer. We are under represented in media and in public life. We face every days sexism that is no longer even noticed, and when we breastfeed many women are anxious about going out in public where they may need to breastfeed. When the media discusses breastfeeding in public they invariably run polls asking if it is ok to feed in public. They have commentators who debate both sides. Where women feel they cannot leave the house and breastfeed, feel they need to express Breastmilk to feed via bottle in public, or go out but feel uncomfortable there is no wonder that these kind of headlines appear. The subsequent alienation of breastfeeding and formula feeding parents / men and women from each other that comes with these news stories helps no one - certainly not mums and babies. People often wonder why breastfeeding rates are not better in the UK when there are 39 weeks of paid maternity. This is one of the reasons. I believe its no coincidence that the Nordic countries, where breastfeeding rates are high, are also considered more equal and progressive societies.

Catirona Clear's book, "Women of The House" discusses how breastfeeding was already in decline in Ireland in the 1920s. It was seen as socially isolating and with the advent of electricity in the 1950s women began to choose formula for their own comfort. Today it can continue to be socially isolating if women don't know where to look for support, or are the first in their extended family to breastfeed (see the section at the side of this blog for local support options). 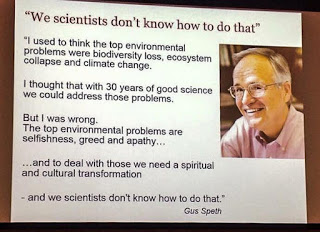 ...except that we do know how to do it. The recent Lancet breastfeeding series spelled it out. They suggested a 6 point action plan:

1. "Disseminate the information" - the information that needs to get out is much more than about nutrition in my view. It is about organ development, about the genetic information passed in breastmilk, growth factors, epigenetic changes, the programming of the body by breastmilk. The lifelong impact that is so unknown by most. The amazing properties of breastmilk and the capacity of women must be recognised. The media needs to take a positive role here.

2. "Foster positive societal attitudes towards breastfeeding" - this is where the attitudes to breastfeeding in public and the normalisation of breastfeeding or expressing at work comes in, and this is essential. Where women feel isolated or criticised and unequal, breastfeeding will not become the norm for feeding our babies again. Women need to be able to breastfeed while continuing to be part of society.

3. "Show political will" - there needs to be a public health campaign just as we see around other health campaigns like vaccination or stopping smoking, or how they are beginning to tackle obesity with the sugar tax. There will be local elections later this year. How high on your candidate's agenda is breastfeeding? Do they understand the value of human milk? Will they support legislation to protect breastfeeding in public in NI like they have in other areas of the UK?

5. "Scale up and monitor breastfeeding interventions and trends in breastfeeding practices" - here is where we get into the practical support. Women want to breastfeed. We know that. The majority of women begin to breastfeed after they birth their babies, but in many cases they are discharged from care and left to get on with it with very poor support at times. Support needs to improve to help women to reach that 6 week mark and allow them to feed for as long as they want to. The reason that I quoted an infant feeding survey from 2010 is that funding was since withdrawn and there hasn't been a survey any more recently. That needs to be re-introduced.

6. "Political institutions to exercise their authority and remove structural and societal barriers that hinder women’s ability to breastfeed" - they suggest workplace interventions to help women, and to ensure that all health services are baby friendly. For me, birth practices and hospital protocols play a massive role in either helping or hindering breastfeeding.

Have you noticed that 5 out of 6 of those action points are not aimed at working directly with the mothers? They are aimed at society, at governments, at policies, at corporate marketing, at workplaces, the health system. Women deserve to feel the joy of breastfeeding as long as they want, and it is a joy - it truly is. Babies deserve to be breastfed. We do need more breastfeeding. Absolutely we do. Jamie is absolutely right about that. It's just that the way to get there is much more complex than telling women that it is easy, convenient, nutritious, better and free.

The last Lancet series was on obesity, and the evidence from it (along with Jamie's suggestion of tacking fizzy drinks) is now being tackled by government and many people are now working on the recommendations from the new Lancet breastfeeding series. His argument for breastfeeding may have been a little simplistic, but if Jamie does decide to step back into the limelight to tackle the societal issues around breastfeeding I commend him for it. The Lancet series said,

Well done to Jamie for starting to do his part. We all need to. Don't forget to talk to your local politicians when they come knocking.