Breast Shaping - It is ok to hold your breast!

Breast shaping (shaping / holding your breast with your hand in order to help your baby get a deeper latch can be very helpful for many babies in the early weeks of breastfeeding. Recently, however, when I've suggested breast shaping to women, they are more and more frequently saying to me, "But is it ok to do that? Won't I get blocked ducts?" Generally they have been told by someone to stop doing it. I am really uncomfortable with women being made to feel like they cannot put their own hands on their own body to help them with breastfeeding. So let's talk about breast shaping, and lets talk about blocked ducts.

Breast shaping can help young babies latch for lots of reasons. If a mum has flatter nipples, it can help to get the nipple deeper into baby's mouth. If mum is engorged and the breast is very rounded it can help baby to get more of a grip on the breast. If the breast is large and heavy it helps to lift the weight off baby's chin and chest. Taking the weight off the lower jaw also helps babies to get their chin forward and move their tongue well. For this reason it also helps tongue tied babies, or babies who's tongue is restricted due to head moulding from birth, to optimise their tongue and jaw movement. It can also help a mum with larger breasts to be able to see her nipple and baby's mouth more clearly.

Like everything, we have itemised and named different ways to hold the breast. Common terms are the C hold, the U hold and the Scissor hold. 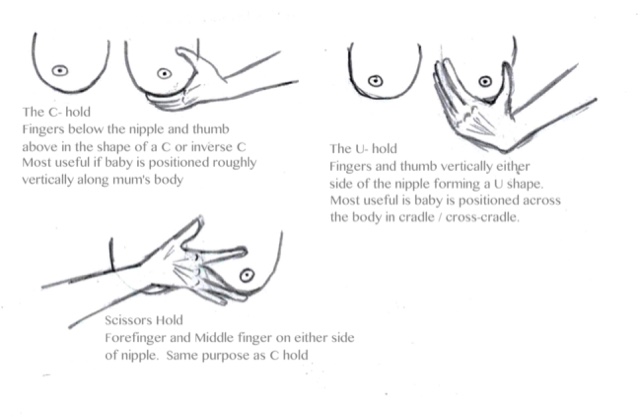 By naming them we kind of legitimise them as a technique with correct and incorrect usage, when in fact women throughout time have just used their hands on their body instinctively to help their baby, and they do it because it works and it does help. In fact I think it is when women are instinctively using their hands that someone says to then, "Oh don't do that - it can cause blocked ducts".

Shapes and holds come in many forms. The guide as to which hold might help best is the position of baby's mouth approaching the breast. In the diagrams above I have added a little text explaining when they are often useful (If you click on the image it will enlarge). The point of shaping is to make the breast a little narrower to aid with attachment. The C hold for example is useful if a baby is laying up and down your body. In this position the thumb is parallel with baby's top lip and the fingers parallel with the lower lip. This hold wouldn't help with a cradle position as it would actually make the area that the baby was going to latch to even larger. It would be essentially like turning a burger sideways and asking us to bite it. In cradle hold therefore, the U hold (or alternatives) work better because it narrows the breast in the correct direction. In U hold the thumb and fingers are parallel with the lips of a baby latching in cradle hold.

Does breast shaping cause blocked ducts?

The idea of blocked ducts can be frightening, particularly if you've had mastitis before or know someone who had mastitis. The most common reason for blocked ducts is from milk not flowing freely. The most common reason for that, in turn, is a baby not feeding well or not frequently enough. The situation where a baby is not latching on well and/or not removing milk well from the breast will increase the risk of milk stasis and a blocked duct. A missed feed (e.g. baby sleeping longer than usual, or perhaps disruptions to feeds around holiday times) will disrupt the usual frequent flow of milk and increase the risk of a blocked duct. Any kind of scheduling of feeds has the same risk. Oversupply can also increase the risk just due to the volume of milk which might remain static in the breast after a feed. The worry about oversupply is more common that actual oversupply however, in my experience - particularly around the 3 weeks mark. Inflammation also raises the risk. That inflammation may come from an infection, from allergy, from trauma. Trauma to the nipple (usually from poor attachment at the breast) increases the risk of infection and of blockages. Finally blockages can be caused by pressure on the breast. This may be from sleeping position (particularly sleeping on your front), it may be from a tight fitting bra or clothes, and the theory goes - from fingers holding the breast. Stress is also a significant risk factor.

To get an example of how often fingers/hands actually caused blocked ducts, I decided to have a look at the literature today. There is plenty of literature on mastitis and showing blocked ducts as a precursor of mastitis, but not so much on the causes of the blocked ducts themselves. Nevertheless this is what I found.

A 1998 study by Fetherson [1] found that in first time mothers the risk factors for mastitis were,

blocked duct(s), restriction from a tight bra, attachment difficulties, and nipple pain during a feed were the significant predictors for mastitis

It's worth remembering here that the tight bra and attachment difficulties (which cause nipple pain) are a cause of blocked ducts - which then may progress to mastitis, so the original issue was likely one of these. In mothers who had breastfed previously the risk factors were stated as follows:

A 2006 article by Suzanne Hertzel Campbell [2] in the Journal of Human Lactation on causes of recurrent blocked ducts states the following:

Factors that can lead to plugged ducts include insufficiently emptied breasts related to following arbitrary cultural rules about restricting or timing feeds or sideswitching.... Older infants’ developmental changes, including increased mobility and greater interest in their environment, lead to sudden pulling at the nipple and less than optimal positioning. Infants with older siblings may be exposed to more distractions, causing them to quit feeding early and/or to nurse less often. In addition, at this age infants may start sleeping longer during the night, resulting in decreased breast emptying. Outside environmental factors that cause sustained pressure on the breast, such as infant carriers (especially front-holding), heavy purses or diaper bags, and restrictive clothing (eg, tight, underwire, or sport bras, bathing suit), may also interrupt the milk flow, resulting in plugged ducts.5,6 Other factors that may affect the woman’s physical and emotional health are fatigue and maternal stress.

I have bolded "sustained pressure" here, because I think this is extremely significant when we are considering the effect of holding the breast. Lying on the breast for several hours, wearing a tight fitting bra for a day or overnight, wearing a top or dress which is tight for a day, is very different to holding the breast for latching on, or holding the breast for a short time during a feed. Even if women need to hold the breast for most of the feed they generally shift during that feed. It's uncomfortable for the shoulders, the back etc for a woman to hold one arm and hand position for the entire length of time that a newborn may be at the breast, so women move. They shift their hands, they adjust their shoulders. I don't think I have ever seen a woman rigidly hold a hand position for long periods while a baby feeds. This idea of hands causing an issue, I believe also may come from an older idea of how the ducts operate within the breast. It used to be thought that ducts move in lines directly to the nipple. Like a tree, twigs lead to branches, which lead into larger branches, which lead into the trunk. What we now know from scans however is that the ducts operate in an interconnecting network. There are connections between lobes (branches) in the breast, unlike a tree (Geddes 2007 [3]). Milk can flow freely through from one lobe to another to reach the nipple.

One other piece of information to consider here is what we as breastfeeding supporters often suggest if a baby's weight gain is low, and that is breast compression! We actually suggest putting hands on the breast, and compressing in order to increase milk flow and to keep the baby sucking. No one seems to see the contradiction here when telling women not to touch their breasts to help with attachment. Breast compression works and is a helpful technique, and a technique which is hands on.

As a society we are all too frequently afraid to touch our breasts. We have educational posters and videos to teach us how to check for breast cancer because we are unfamiliar with handling our breasts. We are unfamiliar with our own bodies, how they feel and how they work, and this is part of what makes breastfeeding difficult. Women since time immemorial have held their breasts while breastfeeding because for those women it helps. It works. If your baby attaches better with breast shaping I would argue that it decreases your risk of blocked ducts, since poor attachment and drainage is likely the primary cause of blockages.

Get to know your body and your breasts, and if you instinctively feel that holding will help - try it. If you feel your baby is bobbing about at the nipple and having trouble with attaching or getting the nipple deeply into their mouth, it's ok to try breast shaping. If your baby latches on well with breast shaping but falls off when you let go, it's ok to hold the breast. If it feels better and it is working, then it works for you. Most of all, know that it's ok to touch your own body. It's ok to hold your breast.